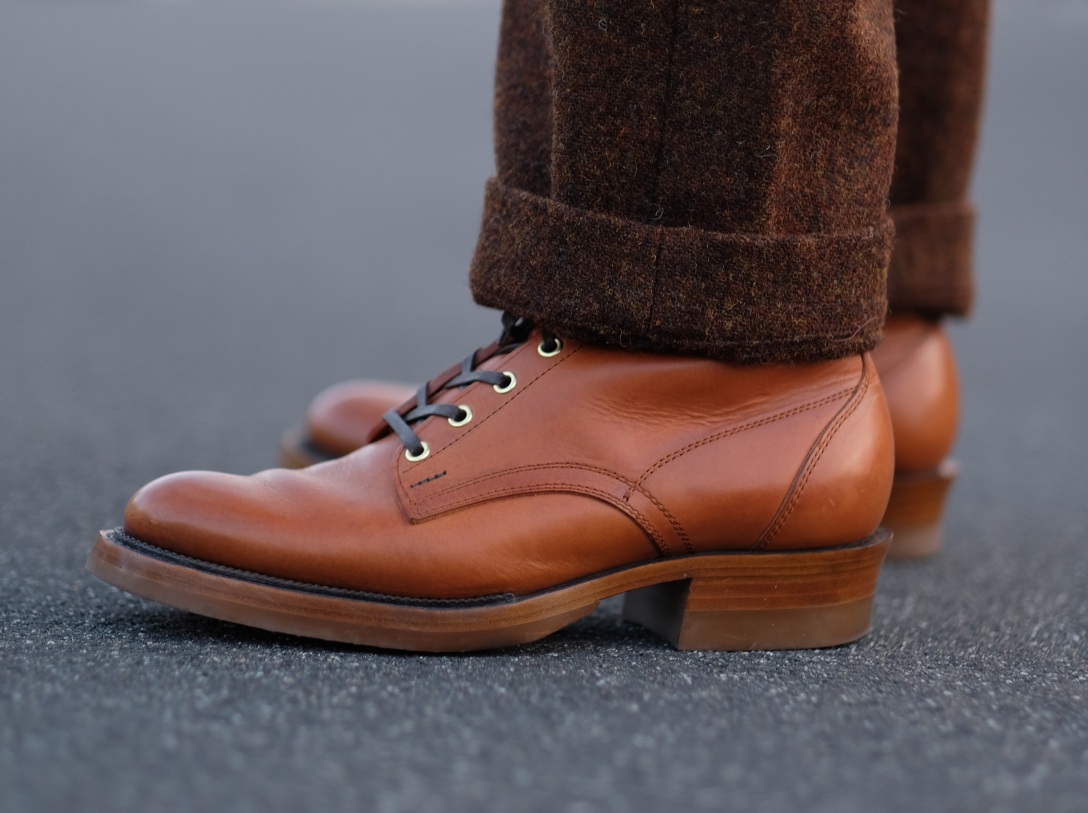 Just over two years ago, I wrote a review of my White Kloud boots. I did not hesitate to say that I considered them to be the very best casual/work-style boots that a person can buy in the world. I have now owned the boots for over two full years and have also acquired quite a few other boots as well. The question is: after all this, has my opinion on them changed at all?

Well, the boots certainly do not look as pristine and perfect as they did when they first arrived. How could they? The boots were so perfect that they looked like they came out of a laboratory rather than someone’s workshop. It almost seemed impossible that a human made them. They were that perfect. When I first received the boots, I absolutely babied them. In fact, before I wore them for the first time, I brought them to a hang with some of my fellow Amekaji enthusiasts and just showed them the boots because I was so in awe of them that I just felt that people needed to see them in all their glory.

These boots still get treated a little more delicately than some of my other boots, but they certainly have not been babied. They have been worn for 16 hour long days, in rain, in snow, and on a second vacation to Japan. Some of the glitter of their original perfection has fallen away at this point, but much of it remains. The upper stitching is still perfect, the hand stitched outsole stitching is also as perfect as it ever was. The shape of the heel is largely intact and thanks to a refresh from the master himself, and a fair amount of the shine is still left as well. Without a doubt, these boots have not put a foot wrong and are holding up wonderfully.The leather has also darkened, creased, and scuffed with wear and in my opinion, it absolutely looks better than it did when it was new, and it already looked pretty fantastic back then. Basically, the new car smell is gone, but the fact that these boots are exquisitely made is still apparent.

The area in which these boots have improved the most is in the comfort. As mentioned before, they were already comfortable when new and break in was almost non-existent for me. They still fit slightly snug, but are still the most comfortable boots that I own as long as I wear thinner socks with them. These are not even my most worn boots, but they have conformed to my feet more than any other boots that I have ever owned by a frighteningly wide margin. They have gotten obscenely comfortable to walk in and are easily my first choice when I need to be on my feet and/or walk a lot.

With the passage of time, I have gotten some more information on why this comfort is so impressive. Firstly, I have learned that Goto-San of White Kloud uses Badalassi Carlo leather for the insoles. This is an extremely expensive and high quality leather to use for an insole, but he did it and wow does it make a difference. As mentioned before, it has conformed to my foot more than any other boot and the leather is part of it. Another piece of information that could be partly responsible for the comfort is the fact that I learned that Goto-San studied reflexology in his past and used to work as a foot masseur. I cannot say for sure that this has affected his boot design, but it’s certainly possible. Either way, these are the most comfortable and form fitting boots I own and it is not even close. Comfort is subjective, but using extremely expensive and high quality leather for insoles like White Kloud has done is objective and that is impressive.

OK, so the boots have proven to be just as well made as I thought they were and the comfort is even better than I ever thought it could be. What about other boots? Have I tried anything else that has come close to White Kloud? No. I have not. I have tried quite a lot of other boots since owning these, but they are still by far the best boots available. There are a lot of other great bootmakers out there and many of them offer incredibly well made boots for surprisingly low prices, but they still don’t match White Kloud.

There are other additional pieces of information that I have learned since I did my first review that make White Kloud boots even better than I thought they were. I also learned that he actually does the sanding and polishing of the edges and heels of his boots by hand. He uses different grits of sandpaper and polishing cloths to hand sand and buff the edges to a mirror shine, something I haven’t even seen dress shoe makers match.* Something else that I have learned is that not only does Goto-San hand welt and hand stitch the outsoles for many of his boots, he actually makes the thread for the hand welting himself! He gets the raw materials, including the wax, hemp yarns, and boar hair and makes the actual thread himself which is pretty insane and truly shows his commitment to his craft.

On top of this, he does offer semi-bespoke and completely bespoke lasts for his customers. This is something that bespoke shoemakers offer and to have all of this available with casual boots like these is quite impressive. A true custom last is not easy to create and of course this adds more to the cost of the boots, but it is still an impressive option for those that desire it and again goes to show the range of his abilities as a boot/shoemaker.

Basically, what you are getting with White Kloud truly is at the level of extremely high end, bespoke shoemakers with the styling of early and mid century American work boots. There is no other place you can get this. To be clear, I am not saying that other boots are not great because I have many other pairs of boots that I absolutely love. What I am saying is that no other bootmaker offers anything like the service and product that White Kloud offers. The details, construction, and finishing quality cannot be matched in casual boots. I own boots from Clinch, Role Club,  Flame Panda, Onderhoud, John Lofgren, Viberg, Attractions,  Motor, Nicks, Wesco, Carmina, and more and have tried on/handled boots from several more makers and nothing matches my White Kloud boots. Honestly, I would put him up against many of the great dress shoe makers as well. That may seem far fetched at first, but keep in mind that he was trained by a bespoke dress shoe maker himself.

I was actually recently talking to a couple of the people who came to Railcar to order White Kloud boots the other day and we were discussing just how much White Kloud changes your perspective on boots once you see them in person, handle them, and try them on. These guys have some extremely high end boots. They own boots that I have seen other people ‘call perfect,’ but compared to White Kloud they are not. We talked about how these other great boots pale in comparison to Show Goto’s work. White Kloud makes everything look worse by comparison. He clicks leather better than other brands, he cuts the leather panels better, and everything is stitched and finished flawlessly. They are the standard by which all other boots should be measured.

What is more is that since my first review, I have had the good fortune of meeting with Goto-San several more times. My brother and I went to his shop so he could order his boots and then we went out for dinner and drinks after that. We then went out for dinner and drinks again the day after that in Tokyo. He also came to California in December of 2019 and I set up a fitting session for anyone to order a pair of boots without going to Japan. We went to In N Out after that and a few days later, I took him out for a day in socal. At this point I can say that while I am still a customer, you could say that we are friends. I am saying this for two reasons. Firstly, getting to know Goto-San has shown me what a kind and incredible human that he is. Secondly, I am sure that this relationship only makes my opinion of his boots even higher than it would be otherwise.

To be clear, I have been completely consistent on White Kloud boots for years. I thought they looked like the best boots in the world when I only saw pictures of them and knew the basic information about them. I thought they were the best when I first got them, and I still think that now. I get no commission or reward for praising his boots. I do so because I love them and believe that someone who is so skilled and devoted to his craft deserves to have his work shared with the world and given its due credit.

However, I will fully admit that I am heavily biased at this point. No human can ever be unbiased and I am no exception. If you want to discount what I say because I am friends with the maker now, I can understand that. With that said, I do believe that I have provided some pretty compelling objective evidence as to why his boots are unparalleled.

To answer my initial question: yes, my opinion has changed on White Kloud. I think they’re even better now than I did when I first got them and wrote my initial review. They have shown no faults or issues so far in my ownership. The boots are now more comfortable than ever and are easily my most comfortable boots. They have aged incredibly gracefully so far as well, making them perhaps more beautiful than they even were initially, even if they are not quite as pristine. I have also learned more about the extreme levels of craftsmanship that go into a pair of White Klouds and owning more high end boots has only confirmed just how special Show Goto is as a bootmaker.

As of the posting of this review, my brother has received his pair of White Kloud boots and they are just as perfect as mine are and I have my second pair coming in October/November made with Japanese shell cordovan leather. I imagine they will be just as amazing as my first pair, if not better and I will certainly post a review of them when I get them. If you ever plan on visiting Japan and love boots, I cannot recommend White Kloud enough. I have owned a lot of boots and a lot of clothing and nothing I have matches my White Kloud boots.

1 thought on “Are White Kloud Boot Still the Best Boots in the World? Two Year Review”