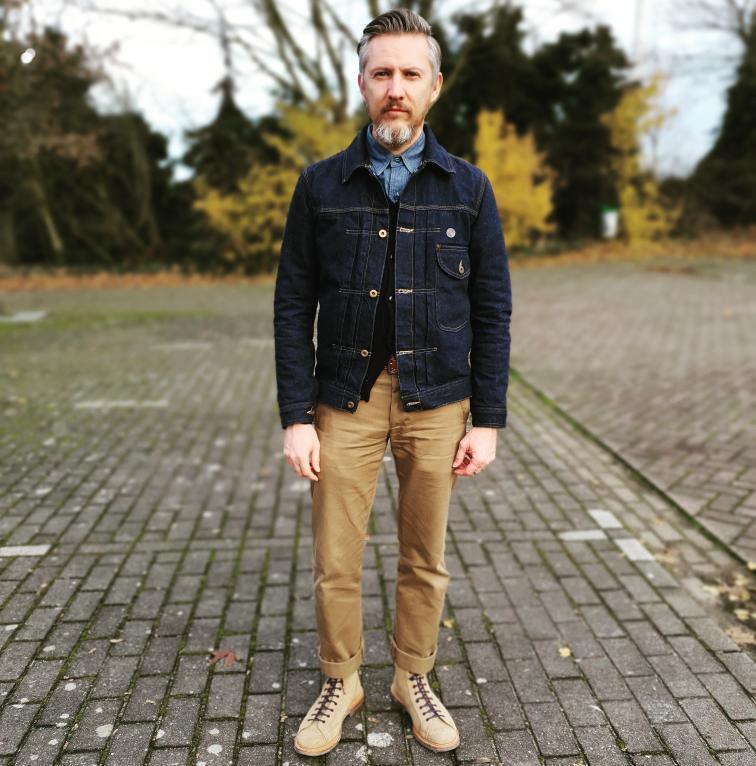 We are continuing the trend of interviewing non-British Europeans for Icons of Style! Last time, Volvo_Sufu from Italy was featured and today, we are interviewing Chris from Belgium who is known as Slab on some forums and sasaki_kojiro13 on instagram. Like Volvo, Chris has a criminally low number of followers given how incredible his style is, proving that Instagram has no taste. I have known Chris for quite a few years thanks to the forums we have both been members of, especially Denimbro. In fact, I once bought a pair of Freewheelers trousers off of him even though he was and still is a smaller size than me. However, that Freewheelers purchase would be fortuitous as Chris and I would connect on our love for Freewheelers products.

Chris has a varied style, which is one of the most impressive aspects of his outfits. He wears a lot of more classic style pieces from brands such as Freewheelers and TCB, but also will wear much slimmer jeans than most Freewheelers fans will. He also wears a fair amount of sneakers at times, but has also worn turtleneck sweaters, peacoats, and some very cool outerwear vests. He also does a great job with color. He does love indigo, but often matches indigo pieces with other colors such as browns, greens, greys, and blacks and even with multiple blue/indigo pieces, goes for different shades so nothing looks too monotone. While he has a nice and varied collection of boots, by far the most impressive aspect of his wardrobe is his jacket collection. In fact, I think that perhaps with the exception of johnbbrooklyn, Chris has the most varied and impressive collection of jackets. His lineup ranges from several Freewheelers leather jackets, denim jackets, military repro jackets, peacoats, ranch jackets, sack coats, and more.

He does not use an impressive camera like many Amekaji-heritage instagrammers do and that belies just how impressive his style is. If you look at the pieces he owns, how well everything fits him, and how well put together his outfits are, you can tell that this is one stylish dude. I must also point out that he has great hair and styles it well too. There are not many people who have as impressive of a wardrobe as Chris and even fewer who where it as well as him so without further ado, let’s get into the interview.

Almost Vintage Style: When and how did you get into raw denim, boots, and quality clothing?

sasaki_kojiro13:It was around 2001 when I bought my first raw selvedge denim. Before that I always wore pre-faded denim that I picked up without giving it much thought. There was this little streetwear shop in my city that sold Nudie jeans. The owner explained the Nudie adagio of wearing them as long as possible without washing to realize personal and unique fades. I was immediately enthusiastic and bought a pair of regular Ralf, a straight fit that I wore for almost a year. After that I started exploring the internet and quickly learned, through the combined knowledge of fellow denim enthusiasts on Superfuture, about other brands. I was impressed by the expertise and beauty of Japanese denim fabrics so it was my logical next step in selvedge denim. I started with Samurai Jeans and took it from there. In the meantime my interest started expanding to other elements of clothing. Quality made boots, shirts, jackets,… everything in my wardrobe was subjected to the same high standards as my selvedge denim.

AVS: When and how did style become important to you (was this tied in any way to heritage menswear)?

SK: During my youth I went through different stages of musical interest. These music tastes had a big impact on the way I dressed myself. I went from Hard Rock to House music to Rap over a period of 10 years. Once in my twenties I wanted a clothing style that I could identify with on a more personal level. When I visited Japan I was taken aback at all the styles that people wore there. I felt it was time to step up my game so after learning about Nudie jeans and Japanese brands such as Warehouse, Buzz Rickson and Real McCoys, I knew I had found the style direction I was looking for.

AVS: Who or what influences and inspires your style?

SK: On a personal level I find lots of inspiration with fellow enthusiasts. During the zeros, that was mostly on forums such as Superfuture and Styleforum, later on Denimbro and mostly Instagram now. Instagram is a love it or leave it platform. Personally, I think there are so many amazing people on IG with awesome style, it really is a great community. Old pictures and movies/series are another source of inspiration to me with Peaky Blinders the current epitome of stylish fits.

AVS: How would you describe your personal style?

SK: I do not consider myself a one style person. I like to throw on different style fits depending on the situation and/or my mood. For the most part I am however drawn to vintage style motorcycle and (civilian) military style.

AVS: How important is color and fabric/texture to your outfits?

SK: It probably comes as no surprise to say my favorite color is blue. For the other part I like to combine it with olive, khaki and black. Fabric/texture is everything to me. It’s hugely important (besides the construction) to differentiate and accentuate your outfit. I have 4 dark indigo shirts but the different fabric/texture creates 4 unique pieces. Realistically speaking though, these details are only visible to people who look for them.

AVS: Do you have a favorite season for clothing and why?

SK: My favorite season is autumn. The temperatures are cooler and this opens the possibility to combine and layer pieces, creating unique and more thoughtful combinations. In summer I keep it mostly basic with a tee and/or shirt because of the heat and in winter I usually grab my warmest coat (a down jacket) with a wool knit to keep me as warm as possible, therefore the variety in my outfits is less outspoken during these seasons.

AVS: What is your favorite/signature piece of clothing?

SK: That is by far my Freewheelers Mulholland jacket in black Shinki horsehide. A timeless and classic piece that can be combined in a casual or dressy outfit. My other favorite pieces are my Trickers & Clobbercalm monkey boots, my Pure Blue Japan x Okayama denim kakishibu denim and my Stevenson Overalls Cody denim shirt.

AVS: Do you have a favorite category of clothing (boots, chinos, t shirts, etc) and why?

SK: I’m a sucker for boots and jackets. I would literally buy a new pair of boots and jacket every week if I could. These categories are i.m.o. the most important clothing pieces to stand out in an outfit and distinguish itself from the crowd of mass produced sweat shop clothing.

AVS: What is your favorite clothing brand and why?

SK: Definitely Freewheelers; the high level of detail and construction, the exceptional fabrics, combined with a unique and creative take on military and retro clothing push this brand to the top. There are of course lots of other brands that I love such as the Japanese brands The Real McCoys, Stevenson Overalls, Warehouse, Ooe Yufukuten, Mister Freedom…From Europe I really like what Fleurs de Bagne is doing as well as Companion Denim, Shangri-La Heritage and Dawson Denim. From North America I’m really enamored by the bootmakers White’s, Viberg and Wesco.

AVS: Are there any items that you are looking to purchase soon or are on your wish list?

AVS:Describe your favorite outfit that you have worn or plan on wearing.

SK:Even though I like to layer pieces, I don’t always get the chance to do so due of weather circumstances but my favorite outfit would consist of a henley with an indigo dyed shirt, a denim jacket over it and topped by a khaki/olive colored military style jacket. A pair of denim with some lace up boots and I’m ready to go! In a few years I might start exploring the more formal retro attire suits (think 1920’s) but for now I’m feeling quite comfortable in my current style.

AVS: Are there any other people in or out of the denim/heritage menswear community that you think have great style?

SK:Without sounding too much as a cliché I love Steve McQueen, Paul Newman and Robert Redford in their glory years. As I mentioned before I think there are so many stylish people on IG and the denim community. If I really have to name one, it would be Illcutz as I absolutely love the combinations he comes up with.

AVS: What separates your style from that of the average denim head?

SK: I don’t think my style is that unique from other denim heads. I hope I can be a source of inspiration for other people just as they are to me.

Thanks Chris for the insightful answers! Personally, I would not say it is too much of a cliche to mention Steve McQueen, Paul Newman, and Robert Redford. They are considered style icons for a reason. I certainly respect the choice of the Freewheelers Mulholland as a favorite piece, having two of them myself. In fact, we have talked with each other quite often about that specific jacket. It also must be pointed out that Chris is one of the most friendly and cordial instagrammers that I have ever talked to, up there with upstateguystyle and denimmindset. Even if he weren’t such a great guy, he would be worth a follow for his style alone, but that should give you extra incentive to follow him.