In the last review, I took a look at my Red Wing boots, concluding that I liked them despite their many flaws and the fact that they are expensive for what they are. Red Wings are ubiquitous in the denim world and in my opinion, are undeniably overrated by a large swath of denim heads. The boots featured in today’s review are very nearly the opposite of the Red Wing boots. They are from a company called Moto Leather in Japan which should already point out to you the first aspect that makes them antithetical to the Red Wings. Nobody has heard of Moto* before.

Simple, but serviceable packaging belies the quality of these boots

I’m sure some people have, but to put the brand in context, the only thread that they have ever been featured in on a forum was a Style Forum thread back in 2012 that gained a grand total of 15 posts by 4 authors. Yeah, this is definitely not Red Wing or Viberg levels of notoriety. Unsurprisingly, this is largely the fault of the brand itself, which makes absolutely no effort whatsoever to make themselves known outside of Japan. This is a shame because spoiler alert, these boots are almost unbelievably good and hopefully this review will alert more people to such a quality company. The other aspect that makes them almost the opposite of Red Wing is their value for money. At retail price, I think most Red Wing boots are overpriced, especially the ones that I purchased. These Moto boots work out to around $700 shipped in the US and while that may sound like a bad value proposition, hopefully the rest of this review and the pictures included will help prove otherwise.

This leather is stunning and the toes are beautifully burnished 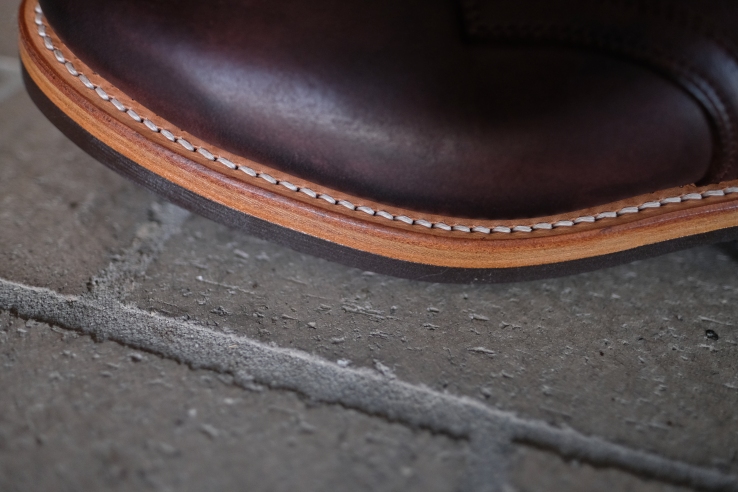 At first glance, they may not appear all that special or unique and that’s because they really aren’t anything insanely creative in terms of design. What makes these boots truly great is what makes all of the best boots truly great, the fact that every aspect of design and construction is subtly calculated and adjusted to near perfection. Let’s look at the design of the boots for a start. They are not overly sleek like most Viberg and Truman boots are, nor are they as bulbous and bulky as offerings from Whites, Wesco, and Rolling Dub Trio can be. They are beautifully well balanced. The toe is slightly upturned, but does not look like the end of a clown shoe. This is nicely offset by the heel, which is a standard woodsman heel, similar to what I have on my engineer boots. 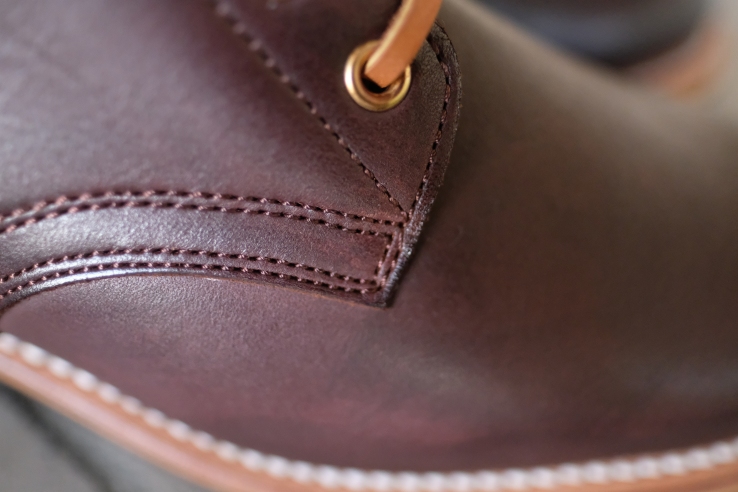 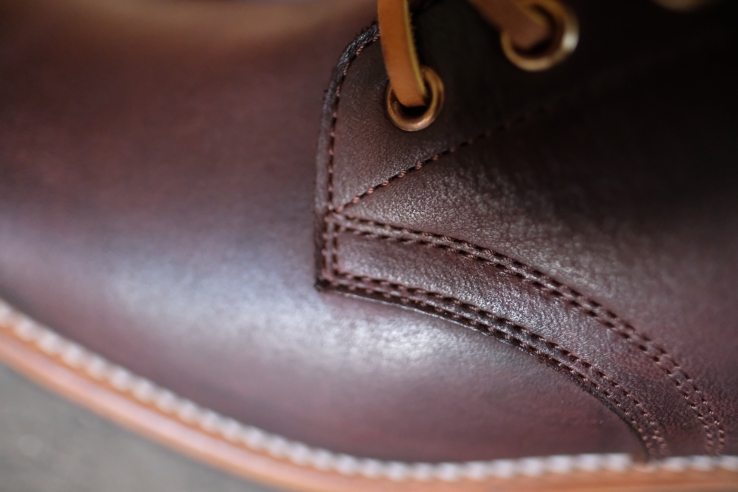 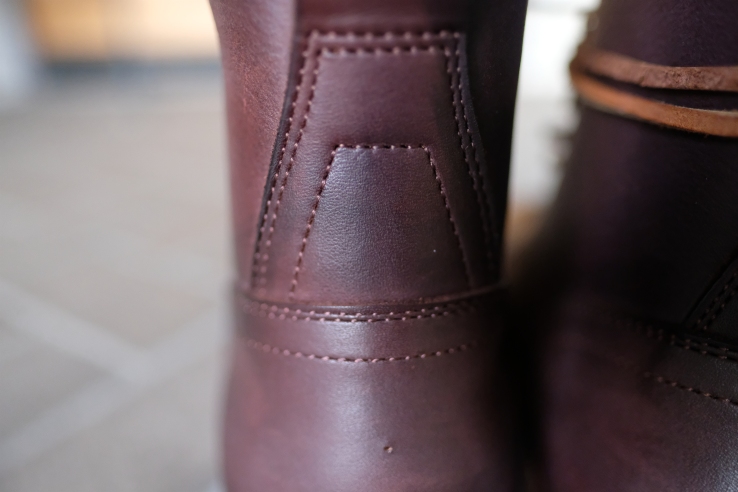 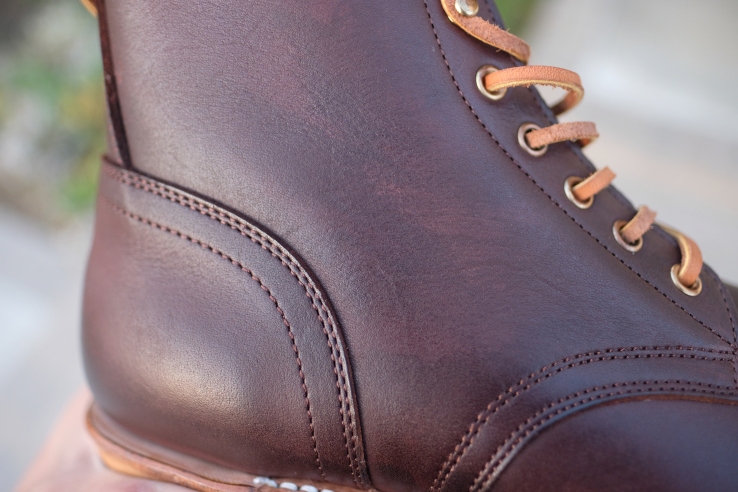 The stitching on the uppers is perfect throughout

By contrast, a pair of Red Wing Iron Rangers has a monstrous toe box with a minuscule heel, making the design completely imbalanced. The reason I was drawn to this boot was because of the design. I wanted a pair of nice lace up boots, but nearly everything I could find that I liked looked like the standard service boot. This boot, on the other hand, blends a packer style boot with a sleeker service boot into a silhouette that while not entirely unique, does stand out in today’s market. 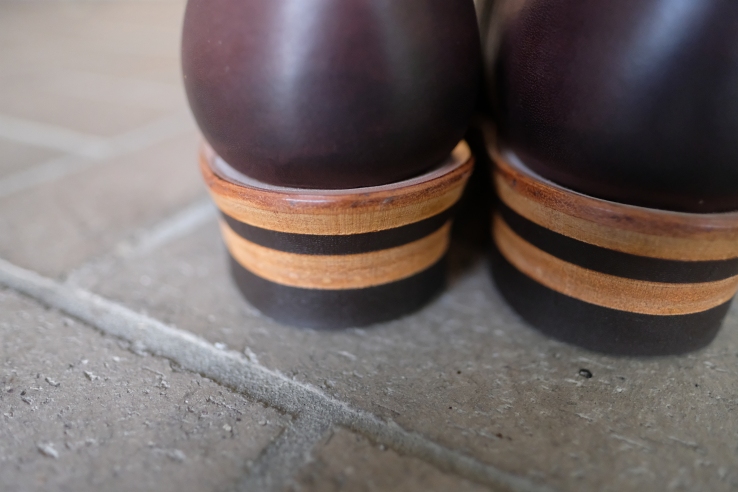 The heals are perfectly shaped

Of course, there are other design and detail choices that I adore about these boots. The pull tab at the back is nicely integrated, making it useful and simultaneously unobtrusive. The tongue is gusseted and the boots feature beautiful quad stitching on the vamp and triple stitching on the counter which not only assists durability, but also looks beautiful. The included leather laces are very nice and contrast the dark leather upper very well. A very nice touch is the fact that these boots feature the brown vibram soles rather than black ones. Other than the shape, the best detail in my eyes is the leather. If you want to, (and I have no idea why you would) you can buy these boots in chromexcel. However, the version that I have hear is made with Japanese vegetable tanned calf hide that is hand painted by Moto themselves. 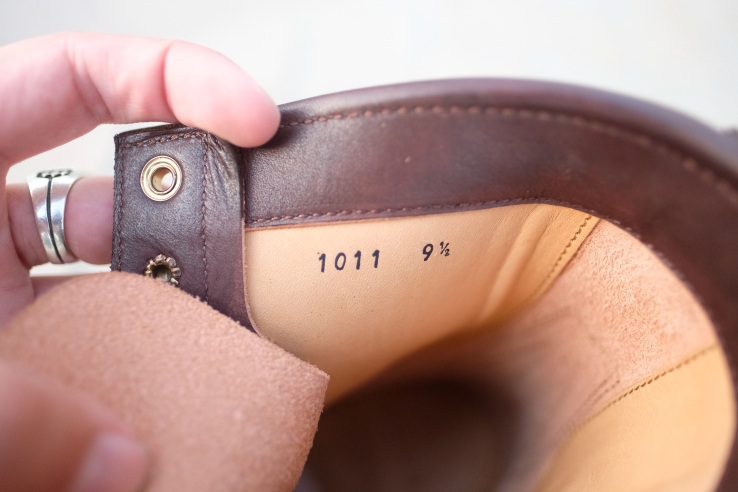 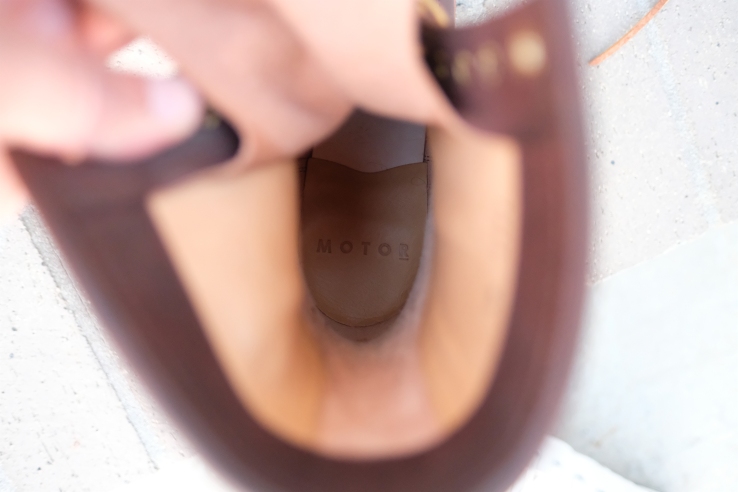 The details are not lacking with these boots

From what I understand, Moto chooses the leather and hand paints it themselves in their workshop, then send it out to a local boot factory which then crafts the boots. While boots being made in house seems to be a big deal in the US, it certainly is not in Japan. This could be viewed negatively, but when the products are this good, what is there to criticize? Japanese shoe and boot factories turn out products that are more neatly and skillfully crafted than anything made in North America apart from Role Club. The stitching is beautifully neat and dense, the leather is absolutely stunning and is wonderfully finished. Inside the boots is the softest and most comfortable lining that I have ever felt in a pair of boots. The leather itself is thick and sturdy, yet not overbearingly stiff. Both heels and edges are masterfully shaped and impeccably finished and the sole stitching is incredibly clean and even.

They look killer with Duck trousers…

Unfortunately, there is one complaint that I have with these beauties and that is the fact that they have speedhooks. Speedhooks are the devil. I know some people love them, but I find them cumbersome, annoying, and unecessary. They should be called slowhooks, snailhooks, stupidlyannoyinghooksofdeathandmisery, or something much more clever and snappy than anything I just wrote. These boots exacerbate the issue by adding regular eyelets on top of the speedhooks. Despite the design being otherwise brilliant, I have to admit I wish it came with eyelets all the way to the top. The only other minor flaw I noticed is the small area above where the leather is less painted than the rest. However, this is on the edge of the leather where it is cut which hardly makes it an actual flaw. These boots are so flawlessly executed that this is the closest thing I can find to a flaw.

… and with red jeans…

Although I am a die hard engineer boots fan, I cannot help but be completely enamored with these Moto boots. I nearly purchased a pair of Truman and Viberg boots before discovering these and I must say that I am glad I waited. While I am still very much interested in Truman and Viberg, I have to say that these boots were unquestionably the better choice for me. The fact that they cost slightly less than the average pair of Vibergs makes them quite a nice value, considering how much more unique the design is and the overall superior craftsmanship.

Since receiving them, these have become my most worn pair of boots. As a 10.5 on a Brannock, the 9.5 fits me quite well, despite my high instep continuing to be an issue. The biggest problem with the boots themselves aside from the speedhooks is the fact that 9.5 is the largest size they come in. This does scale to a US 10.5 foot, but anyone size 11 or above is out of luck ,which is an absolute shame. Hopefully more people in the west will show interest in these boots which may cause Moto to re-think their sizing options.
Either way, this is a critically underrated company that makes unbelievably well-made products at prices that are more than fair for the quality you are receiving. I cannot overstate how beautifully designed and executed these boots are. 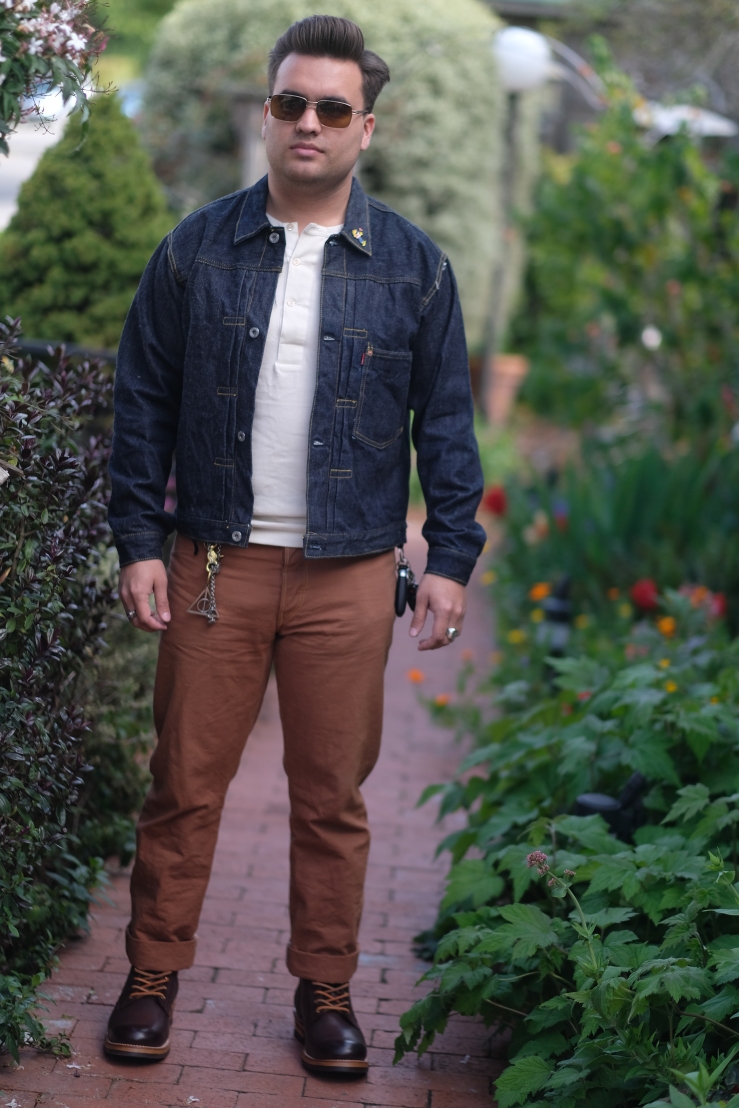 …and with blue jeans

The balance of the last and heel, the subtle shine and depth of the hand-painted leather, the gorgeous perfection of the stitch work all come together to make a boot that I could hardly love anymore if I tried. In past articles, I have stated that Wesco was the apex of value for money and once you went above them in price, your returns begin to diminish. However, after a few weeks with these boots, I have to correct myself and state that these boots from Moto are the apex of value for money.

It should go without saying that I think anyone interested in a pair of lace up boots that is looking at Oak Street, Viberg, Truman, Wesco, or Whites should take a look at these as well, but I am going to say it anyway because things that should go without saying always are said anyway for some reason. This is my opinion obviously, but my opinion is based on the fact of how well these boots are designed and made and on what I have seen and experienced with other boot companies. In addition, I do this not to deride other brands, but instead to lift up lesser known brands that deserve more attention. As I have mentioned many times on here and elsewhere, I do not shy away from my opinions and I hope everyone can respect my view that these boots are better than many other more popular brands out there. The difference between someone liking something more and asserting that something is better is a topic that I will touch on in my very next article.

I love these so much that I’m even gushing about them in these italicized descriptions that nobody probably reads!

I urge anyone interested to take a look at Moto’s website and contact them via email or Instagram with any questions. Their catalogue is quite extensive and includes several lace up boot models, derby shoes, and even engineer boots. They were a pleasure to deal with. In addition, you can feel free to reach out to me with any questions regarding the boots as I can help guide people in ordering as I have done for people ordering from Conner’s Sewing Factory and Brass Tokyo in the past. To be clear, I make no commission for referrals and this is not a sponsored review at all. I simply want to see companies that make products this good to receive the attention and success that they deserve. In fact, my words are meaningless anyway. The pictures of these boots should speak for themselves.

*These boots are labelled under Moto(r) instead of just Moto. Yes, it’s extremely confusing, but it’s still the same company at the end of the day.