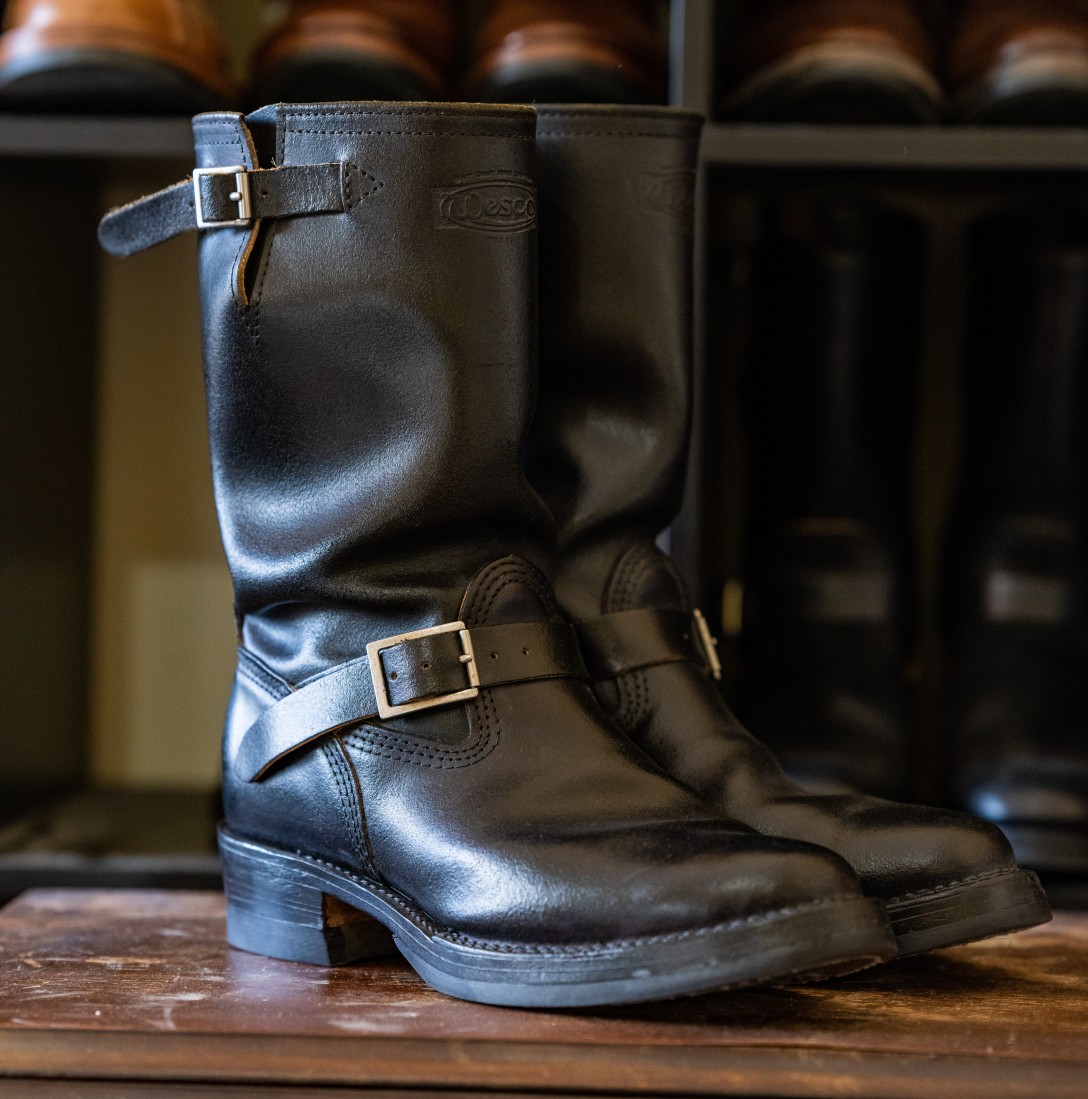 I haven’t done a lot of long term reviews on this site yet, but I definitely want to do more of them. The first one I remember the most was my John Lofgrn engineer boot review. It was quite different to review something I had owned for over half a decade rather than reviewing items that were relatively new to me. It is interesting to see how I feel about items which I have owned for many years after the excitement of it being new has worn off. For the long term reviews I have done so far,  the items have always been ones that I really love. That’s why they get a long term review. I like them enough to keep them and wear them for many years. The boots I have done these reviews for have been my Lofgrens and my custom Clinch horsehide engineers. Both of these are two of my favorite boots.

This pair of boots is different. Today I will be reviewing a pair of boots that have lost their lustre in my eyes and I have quite mixed feelings on. The boots I am talking about are my Wesco x Standard and Strange Knuckle Dragger engineer boots.  I received them in November of 2017 and have had them ever since. However, they have changed quite a lot in that time and could be considered different boots at this point.

Before I get to all of that, I need to cover the basics of these engineers. They are a full height pair of engineers in Horween dark olive waxed flesh leather with brown vibram half soles and heels, triple stitching on the vamp and counter, and v stitch in the back stay. They also have full double leather midsole and are constructed with double row stitchdown construction.

I discussed these features and the quality in my initial review so if you want to learn more, read that review. However, I will again say that the quality is decent, but not impressive. Wesco, like all Pacific Northwest brands, makes boots that are tough and durable, but mediocre in terms of quality control. My specific Wesco boots actually are quite good in terms of QC. There are no major issues. With that said,  they are not as nicely constructed as my boots from Japan, Indonesia, and China. The stitchdown is better than on my first pair of Vibergs, but it isn’t stellar. The upper stitching is not consistent in SPI, especially on the curve of the vamp,  where the stitch count goes down drastically especially on the outer row of stitching. There are lots of other little qc issues and such, but nothing unexpected of boots from this region.

A much bigger issue for me is the fit. When ordering these boots, I tried on a smaller pair and they felt horribly tight.  However, this size 10 doesn’t fit well either. In fact,  to this day these are my worst fitting and least comfortable boots that I own. I am a size 10.5 on a Brannock and took a 10 on these. The MP toe last looks nice for engineers,  but does not fit me well. The toe box feels cramped and too low, even though I have flatter toe boxes that feel more comfort from Clinch and Role Club.

At the same time,  the heel is super loose and the heel cup is way too shallow, therefore not grabbing my heel well at all. These boots still feel like flip flops even after I broke them in. The double leather midsole definitely took a long time to break in, but even with that work done, these are ridiculously uncomfortable.  I have other double midsole boots that are actually quite comfortable for me, but these are not.  Everything just adds up for a boot that I would never choose to wear if I had to walk anywhere other than to my car, into a restaurant, or to a grocery store. I have worn these quite a lot and they are well broken even if I’ve changed them so much that they don’t look like it. They just simply are uncomfortable for me.

Continuing with the negatives,  let’s talk about that Horween dark olive waxed flesh. It is not a bad leather actually, but I really do not like it personally.  Firstly, I have learned that I’m just not a big fan of waxed flesh. I just don’t love the texture and the lack of character and would prefer actual roughout or a standard leather. Another major issue for me is the color. The dark olive is really dark. In most photos it ends up looking black. These boots were ones that I intended to wear with earth tones. I despise mixing black and brown leathers and it looked like I was doing this when I wore these boots with brown leather jackets.

Eventually,  I got sick of this and decided to do something about it. I polished the boots with black shoe polish to make them look more black. This was an improvement for me, but not exactly what I wanted. Soon, I decided to just go all out and fully dye them black.  After purchasing some Saphir black leather dye, I gave these boots a full overdye, even the midsole and outsole. This worked better than I thought, but looked dull so I added waxed polish on top of everything.

The results were even better than I expected they would be. I really liked how the boots looked. Now they have an even more interesting aging potential in my opinion. The green popping out from under the black should look pretty cool when that finally happens.  In my view, the boots also just look surprisingly good after this evolution.  More important for me is the fact that they now actually match with some of my clothing better rather than being in a weird state of limbo, not really matching well with anything.

Of course, the boots still fit me horribly and I would still prefer a standard grain side leather on engineer boots. If I could do it all over again I would certainly not buy these boots again.  To be clear,  this is not the fault of Wesco of Standard and Strange. There is nothing actually wrong with the boots as comfort and fit are subjective.  Plus, Standard and Strange was very helpful with the ordering process and I actually liked the boots when I first got them.

My point with this review is to say that you should really think about your purchases before you make them.  Even if I still ordered Wescos, I would have been much better off ordering something like the Van Cleef or Mister Lou collaborations from Standard and Strange rather than these Knuckle Daggers.  I knew that I cared about matching my leathers,  but I went for something new and shiny rather than something I knew I would like.

With that said, the other lesson I learned is that just because you don’t love an item of clotting, you don’t have to immediately sell it. You can think of other purposes for it, other ways to wear it, or even modify it into something that you like more.

The last lesson is that Wesco MP Toe last engineer boots don’t fit me well and that’s OK. Fit is subjective and that doesn’t mean that these are objectively uncomfortable boots. These are solid boots. I still think that Wesco is a great option for people looking for nicely designed and well made engineers that aren’t crazy expensive. Maybe I’ll try on a pair of Van Cleefs someday, but for now I will just wear my modified Knuckle Draggers and be proud of my mediocre home dye job.