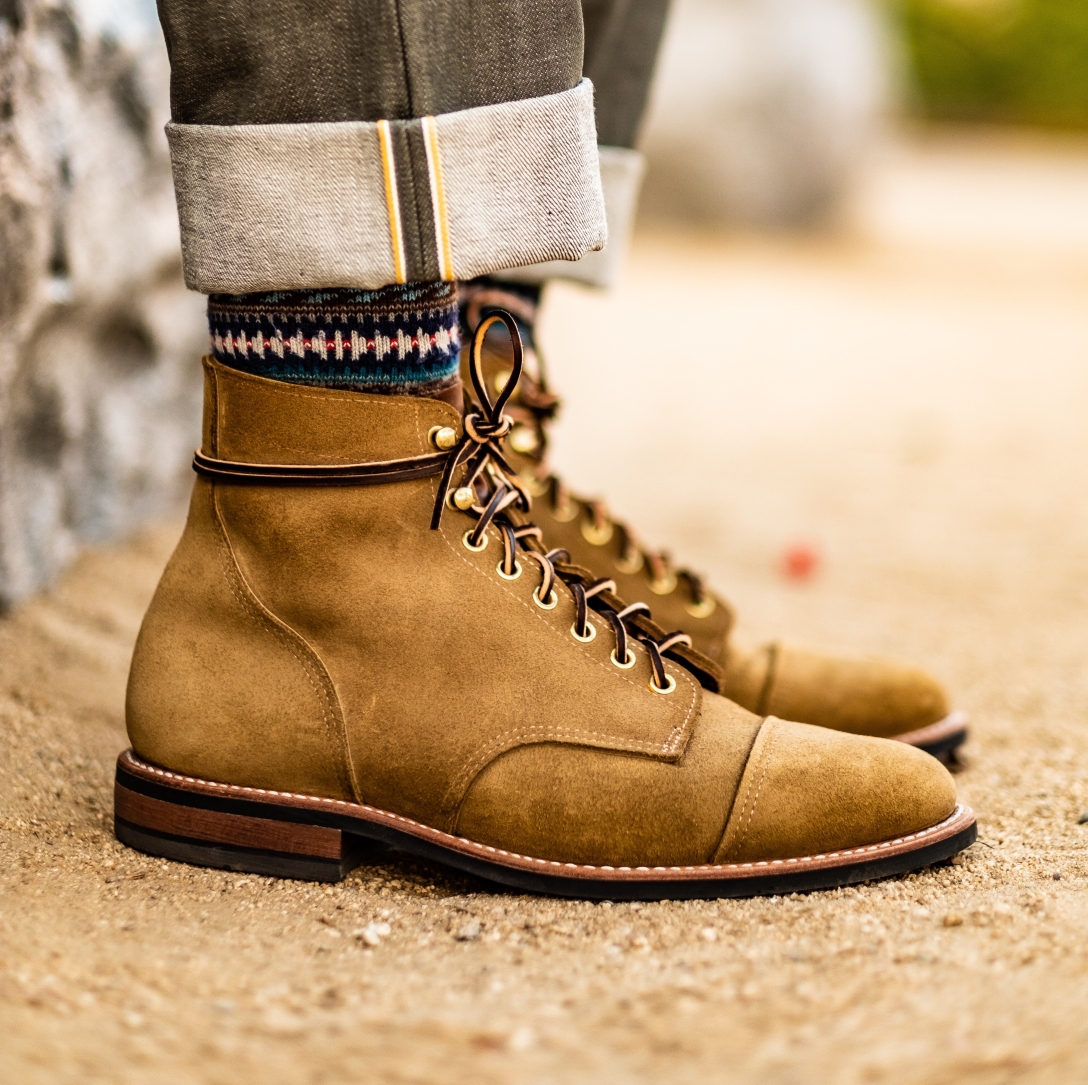 In my last boot review, I discussed Urban Shepherd Boots, a fairly new boot company aiming to take a bite out of the highly sought after sub-$300 boot market. Today, I will discuss another brand aiming to make themselves a king of this category. Mark Albert Boots was started by Mark Albert not long ago. Mark’s story is not dissimilar from that of the founders of Thursday Boots when you read about it. Like them, his journey into starting a boot company began with looking for a good quality, but affordable boot. Not able to find exactly what they were looking for, both ended up starting their own brands.

This is where Mark Albert’s and Thursday’s stories begin to differ. While Thursday decided to hit a low price point by outsourcing their main production to Mexico, Mark Albert wanted to keep things local and decided to have his manufacturing done locally in the USA. In fact, Mark kept the manufacturing extremely local. His boots are made in a small, 50 person factory in Somerset, PA. In fact, this is the same town that Mark’s grandfather ran a shoe repair business until he was 86 years old.

Beyond this, the brand shows itself as being very connected with the workers at the factory. Mark doesn’t just run the brand, he is constantly at the factory that makes his boots. Additionally, the Mark Albert website runs a series called “Meet the Makers” that profiles the people who actually work at the factory. I have to say that this is a very nice touch and it’s pretty awesome in my opinion to see a brand so connected with its means of production.

I am making no bones about the fact that I like the way Mark Albert Boots is handling their production, but what do I think of the boots themselves? As is my policy, I must disclose that these boots were sent to me free of charge for review. I will do my best to prevent this from impacting my review as much as possible, but of course, I believe that this is impossible and anyone who tells you otherwise is either attempting to fool you or themselves. Additionally, my pair is a very early sample pair and this will be mentioned again further on in this review. Please keep all of this information in mind when reading this review.

Upon first glance, the Uptown Boot from Mark Albert Boots looks like a Viberg Service Boot had a one night stand with a Red Wing Iron Ranger. Despite that, I actually like the way these boots look. They are generic in the best way possible. They are not too rugged, not too dressy. Nothing is too sleek, but nothing is too bulbous or bulky either. Nothing is special about the design either, but then again, this is coming from the perspective of someone who almost exclusively wears boots with woodsman heels. It may not sound like it, but I personally am impressed with the design of this boot. The balancing act is done well here and designing something so perfectly vanilla is exactly what should be done for a mainstay model in a relatively entry level enthusiast boot brand. My only real issue is that the leather sole is too thin. I would much prefer it to be thicker as I think that would look better.

The good news continues on the materials and features front. These Uptown Boots feature:

All of this is pretty solid on paper. I have had excellent experiences with Vibram soles. This one is unsurprisingly, grippier than something like a Dainite sole, especially because it is a mini lug sole. In my view, this is a wonderful balance of practical grip and style as full lug and commando soles look almost as ugly as a man wearing shorts. I also prefer unstructured toes to partially and fully structured toes, and am glad to see actual leather used in the heel stack, which is less common than you would expect at this price point *coughredwingklondikeengineerscostingfourhundreddollarsandnothavingactualleatherheelstacksisacompletejoke*.

The Coyote Roughout is a very nice looking roughout leather that has a unique property of changing color depending on the lighting. It looks sand, light tan, light brown, and even slightly green in some lighting. I love this aspect of the leather. Otherwise it is not overly impressive, but nothing is disappointing about it either. Roughout is a great choice if you want to beat up your boots and this has already been gaining some nice scuffs and looking all the better for it. One other aspect of note is the fact that the laces come extra long so they can be cut to the desired length of the owner which is pretty nice.

Construction overall looks pretty good on these boots. The uppers are very neatly sewn, especially for the price point of $299USD. The least pretty part of the uppers is the double bar tack where the upper meets the vamp on my pair, but Mark has told me that they have already switched to a single bar tack here, which eliminates my only complaint about the upper sewing on these boots. They aren’t 100% perfect, but overall, these are the best sewn uppers under $400 that I have come across aside from my Carmina Chelsea boots, which are now more expensive and not exactly competing with boots like the Uptown. That aside, it is impressive to see such neatly, evenly sewn uppers available at this price point.

The 360 degree Goodyear welt is less stellar, but still well executed. The sizes of the stitches are not entirely consistent, but nothing is egregious and otherwise they are quite neatly sewn with no wonky stitches. Those that really care about water resistance should be happy to see 360 rather than 270 degree stitching. However, these boots have a couple of noticeable flaws that are questionable even at this price point. Firstly, the stitching on the heel counter of the left boot has come loose and is pretty clearly visible. This is more forgivable due to the price of the boots, but still something that I am not thrilled about. Additionally, the left boot has some fairly poor clicking. The roughout leather on the vamp looks different than the leather on the upper and toe cap. Again, this is not a huge deal at this price point, but it is something that I noticed right away.

By far the largest issue on the boots is the fact that they are not quite even. The right boot rocks back and forth significantly more when I am standing still and when you place the boots next to each other, it becomes obvious that they are not sitting the same way. It appears to be some sort of lasting issue. The boots not being lasted evenly is definitely not acceptable. I would be a poor reviewer if I tried to brush over this issue. While walking, this issue is not really noticeable for me, but it is very apparent when I am standing still. Overall, it does not ruin the comfort of the boots, but if I were a paying customer, I absolutely would not have been OK with this.

Fortunately, Mark feels the same way. When I mentioned this to him, he said that in the case of a paying customer, he absolutely would replace these boots. While I was disappointed with the flaw, I have to commend this response. I have heard of major issues (many much bigger deals than this) from every single major casual boot brand on the market except White Kloud*. Yes, this includes all of the brands just under White Kloud quality. No boot brand is perfect so how issues like this are handled matters greatly. The fact that Mark Albert would replace boots with this fault should give potential customers better peace of mind. There are brands with much higher price points that handle issues such as this much worse.

In terms of sizing, I went down by .5 from my size 10.5 Brannock to size 10 with these. The fit is OK for my feet. They feel a little narrow in the ball of the foot (the widest part of the foot) while feeling too loose in the heel. My heels did rub uncomfortably against these boots at first which was not great and it has gotten better, has not completely disappeared yet. I could have gone true to size, but then they would have been quite long in the front. These boots also have synthetic material in the sole which makes them quite flexible, but this also means that they aren’t as supportive as boots with layers of leather in the midsole. After long days, these start to hurt my feet more than my other boots do. Apparently, Mark Albert is now using all leather which I would imagine is a big improvement. The soles of these boots feel way too thin, to the point that I think a sharp rock would actually hurt my feet if I stepped on one. Suffice to say, comfort for me is not great on these boots, but that is subjective.

The Mark Albert Uptown boots are not perfect. They also are not my general cup of tea in terms of styling. However, there are a lot of positives about them as well. The upper stitching is excellent, even when compared to some brands that cost quite a bit more. The leathers are nice, the design of this boot is mass appealing, and the price is right. To me, though, the best aspect of these boots is the fact that they are made in the USA and in a local factory that has meaning to the owner of the brand. I do not expect perfection at this price point. My boots were an earlier prototype and Mark told me that a lot of the kinks were worked out with future runs.

If this is true, then these boots will likely be a solid buy for many people at this price point. A lot of people may not notice or care about the flaws I saw and only one was a major issue, though it was indeed major. My final thought is that I hope the final quality control improves. If it does, I think Mark Albert will continue to be a real contender in this price category and I would love to see that. However, like all of the sub-$400 boots I have reviewed at this point, they are definitely not perfect. If you want truly great boots, you will still have to save up more money.

*White Kloud is in its own insanity tier of quality, makes a very small amount of boots, and almost none of them end up visible to the larger boot buying public, so it is quite possible that he has made mistakes.