First up on our list of one man denim brands is Ooe Yofukuten and before you say anything, allow me to cut you off by admitting that I am well aware of the fact that this brand is run by two people and not one. However, I believe that they absolutely deserve to be considered a one man brand because they are husband and wife which is certainly not equivalent to a normal partnership. Without delving too deeply into spirituality or philosophy I will say that a married couple can be considered as one person in many situations. In addition, Ryo and Hiro Ooe each do a separate job. Ryo is the pattern maker and cutter while Hiro does all of the sewing which means that all products that exit their workshop in the Japanese countryside are sewn by only one man, or in this case, one woman.

Originally making custom pairs of denim, the brand slowly gained a strong cult following to the point that they eventually were forced to discontinue custom orders in favor of releasing series of jeans and other products. While some may lament this, I personally see this as a positive development because it has allowed the couple to stretch their creative muscles and therefore, strengthen their brand and its reputation. During their custom days, the two were known for making jeans of high quality out of a large array of denim. These jeans were well made, but nothing stood out about them in particular.

Fast forward to today and Ooe Yofuketen is a name that means something to anyone who knows anything about raw denim. They have developed an identity as a maker of vintage-inspired denim with classic fits and appointments. This ranges from trousers modelled after 19th century work wear to 1960’s Levi’s inspired jeans. Details such as decorative front pocket stitching, continuous fly construction, lined back pockets, and more have graced the jeans they create. However, I believe that the two things that the brand has become most well-known for are their fits and their time wash denim.

They nail the classic work overall fit better than most, but where Ryo really shines is in the most popular Ooe Yofuketen fit. The OA02 fit is easily the best slim fit cut that I have ever worn in my life. With a fairly high rise, slim top block, and a gradual taper, this fit looks amazing on every person who wears them. The high rise is especially welcome for a slim cut jeans as it allows for a more comfortable fit and lets me tuck in my shirts as well. The OA01 cut is a wonderful classic cut as well based off what I have seen, but I do not have any experience with it.

Standard and Strange stocking the brand and extensively utilizing the 02 cut has only increased their notoriety and popularity. This relationship has led to some impressive collaboration which is exemplified in the pair that I purchased. The OA02XX 1966 One Wash Time Machine jeans are certainly a special pair of denim. Cut in the exemplary 02 cut, they were my favorite fitting pair of jeans for quite some time and to this day, I consider them to be the best slim/tapered cut jeans around.

My pair was a size 35 with the following measurements:

A couple of points to note are that my pair was hemmed from the stock length of 35” to 29”. The 35” inseam is impressive considering that these have already been washed. More importantly, the waist started out at 31”, but after only a couple of days, already stretched out to 35” which is wild, but true. It may be due to the most impressive and exciting aspect of the denim- the wash.

Pre-washed and pre-distressed denim have been popular and in fact, have been the norm now for several decades. We in the raw denim community as a rule despise pre-washed and distressed jeans. Ooe Yofuketen’s time wash is not your normal wash, however. This patent-pending method is not explained due to the beginning of this sentence,* but it is known that the method does not make use of chemicals or traditional washes. The jeans do appear to shrink to the effect of being one-washed as a result of the process.

Either way, the result is subtly stunning. The average person or in fact, even many denim heads would not notice what this process does to the fabric. Rather than being pre-faded, this revolutionary process gives the denim the appearance of deadstock jeans from decades ago. After the treatment, the denim becomes dryer and has a more green/beige cast rather than a straight blue and white look. This certainly gives the jeans a unique look, especially when put up against other pairs of raw denim and it very much contributes to the vintage look of the jeans. The process can be adjusted based on how old the jeans are supposed to look and the best part is that the jeans still fade like a normal unsanforized pair of raws. This pair in particular is a 13.5oz unsanforized denim that is exclusive to Ooe Yofuketen and has been time wash treated to appear as a 50 year old deadstock pair.

An awesome example of what the time wash treatment does

This great feature would be pointless if the jeans themselves were not exceptionally well made and fortunately, they certainly are. Construction details include custom branded copper rivets and fly buttons, hidden back pocket rivets, a beautiful custom collaboration leather patch, and inner detail tag as well. In addition, these are stitched with 100% cotton thread that, while supposedly less durable, does add to the vintage vibe of the pair.

The stitch work itself is essentially immaculate. Roy and RJB may have slightly more surgically straight needlework (especially Roy), but I could never find a single wonky or bad stitch on my pair which is certainly impressive and the overall quality is some of the very highest that I have seen. The best way that I can describe the feel of Ooe Yofuketen jeans is that the stitching is flawless without feeling perfect. What I mean by this is the jeans have a very vintage, handmade feel to them without having any actual flaws or mistakes.

This is a very rare, but impressive trait that I have only come across in this brand. Roy and many other Japanese brands are surgically straight, but they can feel a little clinical as a result. Conners Sewing Factory has an even more vintage and personal feel, but the stitching does have wonky stitches and flaws. Therefore, Ooe strikes a wonderful balance that is difficult to explain, but is certainly something that those who have handled or owned their jeans can likely attest to, unless I’m just insane which is also a possibility.

Now, allow me to address the lime green rhinoceros in the room: I sold this pair of jeans. As perfect of a slim cut as this is, I discovered that I prefer even more vintage and straight cut jeans and therefore, stopped wearing them. In fact, the only slim jeans I still own are my RJB 103bsp pair that I no longer wear, but keep for sentimental reasons  as well as my other pair of RJB jeans that are signed by Masayoshi Kobayashi himself. As the pictures show, these jeans look amazing even on a short guy like me who needs to double cuff a 29” inseam. As previously stated, I loved these jeans and they were beautifully made with no technical drawbacks whatsoever, but the cut of your jeans is a very personal and important aspect and I would rather let someone else actually enjoy them than have them sit in my closet. 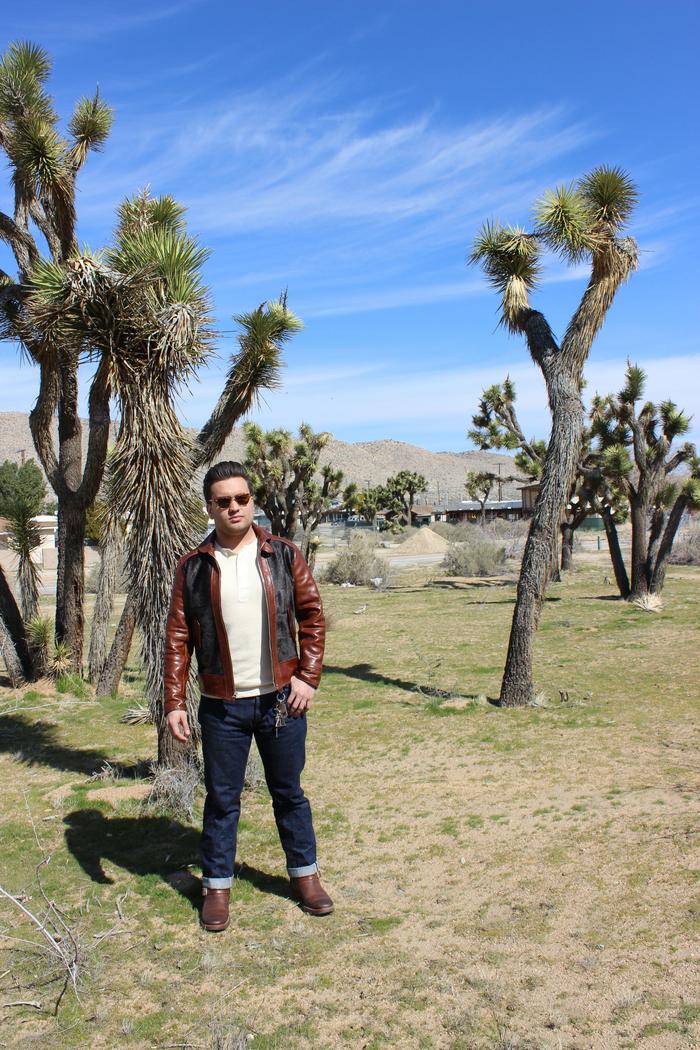 In writing this review, I cannot help but recall the first article I came across on Ooe Yofuketen written by former denim blogger/reviewer Gavin aka Megatron1505. In his review in 2014 of a pair of jeans that was already at least 3 years old at that time, Megatron notes that the pair he handled was technically flawless, but relatively unremarkable with no features or traits worth gushing over or further investigating. After seeing the pictures provided and knowing about the brand’s reputation at the time, I would say that he is spot on here. At that point, the jeans were extremely well made, but offered little else.

That is what has impressed me the most about Ooe Yofukuten since discovering them. They have not only developed an identity and become known for certain positive attributes such as their quality and fit, but they have also innovated with their time wash process as well as become more creative in terms of design. Ryo and Hiro have become more and more enamored with vintage designs and have done a beautiful job of creating products that incorporate design touches from the early 20th century as well as the late 19th century. The quality has been a given since the beginning, but with all of these developments in mind, Ooe Yofukuten now stands as one of the most well regarded denim makers on the market. Given how much I loved my previous pair and how emphatically they are drawing from late 18th century designs, it likely will not be long before I have another pair in my hands.

The vintage details are endless on this pair of trousers including a continuous fly, triple stitching on the seam, and beautifully detailed pocket stitching

This is an example of why I prefer one man denim brands in general and why I have decided to do this comparison series. The passion that this husband and wife team has is blatantly obvious and it is infectious. It is obvious that an intense amount of thought, time, and care are put into each design and each pair of jeans that are made by them. While I can often be highly critical in my reviews and opinions, I have nothing but positive words to say about this brand and their products. They come highly recommended from myself as well as many others who appreciate the qualities that set Ooe Yofukuten apart from the crowd.

If you still are not impressed, allow me to tell you that Ooe Yofukuten also have produced all of the products for High Grade US Standard. Not only that, but they have also partnered with a shirt maker to create a joint venture of t shirts known as M&O Mfg. Co. As an owner of this t shirt, I can attest to it being a beautifully made tube knit garment in a stunning ecru color. It is without question one of my favorite t shirts and the wider neck opening sets it apart. These products help to showcase the versatility of the brand.

Ooe Yofukuten jeans can be purchased at Standard and Strange:

-All pictures not of me are from Standard and Strange